The "firewall for your folders"! ANVIL offers the ultimate in file protection and intrusion detection for your system.

Get your 100% FREE LIFETIME license for up to 5 devices, use the promo code "anvil-now"

Save up to $54 USD a year on a 5 device license, this offer is for a limited time, don't miss out.

Click here to watch Anvil under fire from a WannaCry attack! 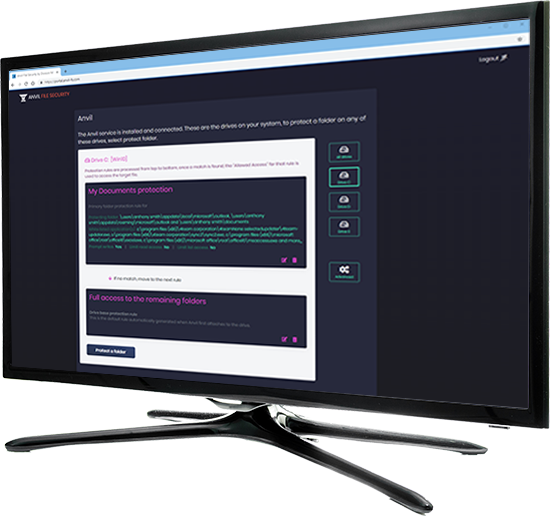 Ransomware, malware, and other APT’s (advanced persistent threats) are rapidly becoming a widespread issue, with attacks increasing in sophistication and frequency. According to Webroot.com there are 1.5 million new phishing sites created every month. These sites, along with an increase in phishing emails, mean that the threat to personal and professional files has never been more significant.

ANVIL changes the way we look at file security, by not only keeping files safe from modification, but also keeping a watch on systems to ensure any attempts to access your files are detected.

“In my opinion, this is the biggest concern that exists now is the threat from software that encrypts” – Steve Gibson, Gibson Research, Security Now podcast, episode 696 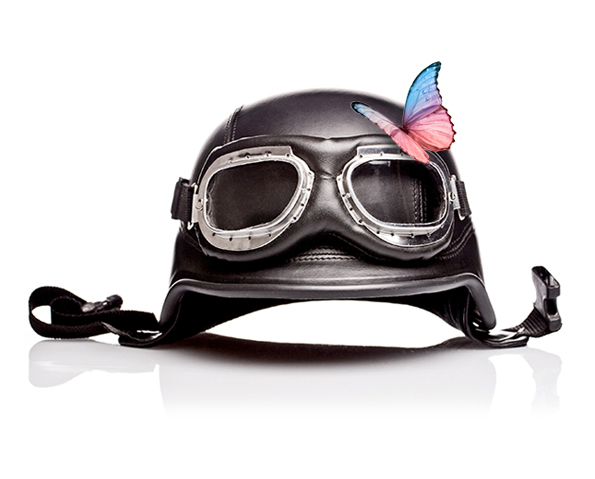 There is an old saying… “prevention is better than a cure”. ANVIL stands alone when it comes to multi-point, file system protection and intrusion detection.

File protection
ANVIL uses several intelligent technologies to prevent files from being modified or damaged. At the simplest level, you can protect a folder by merely allowing only signed applications to alter files. However, you also have the power to specify applications signed by a specific company or organisation… or even individual executables themselves.

APT detection
APT’s (advanced persistent threats) are another area often overlooked… while intrusion detection works well for process-driven malware such as ransomware, APT’s are more about real-life intruders poking around your system and stealing IP. Using Anvil’s “canary file” feature, you can lay down honey pot files that, when opened or copied, silently notify via email. In recent times, exploits around RDP (remote desktop protocol) make APT detection more critical than ever!

ANVIL, engineered for a modern file system
ANVIL is the only platform available that is specifically engineered to protect, monitor and add features to file system folders, including network endpoints. From monitoring and access control, through to intrusion detection and immutable folders, ANVIL provides robust binary protection. 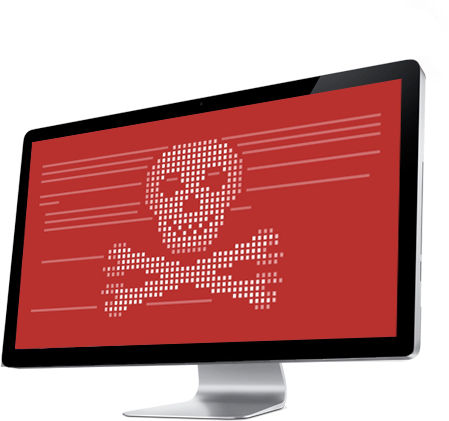 There are any number of security solutions on the market, however, none are engineered for the sole purpose of file protection and intrusion detection. Read more, in our "Why ANVIL" white paper

Anti-virus solutions are not engineered to protect files
Many third-party anti-virus solutions do not explicitly offer file protection, or if they do, its an afterthought, and it's often not clear how the protection works. Anti-virus mostly relies on process filtering, to catch malware as it attacks or infects your system.

Backups can give a false sense of security
While we highly recommend users back up their systems, backups are a double-edged sword, in that you may end up merely backing up the very encrypted files you are trying to protect yourself against.

Windows 10 offers no real protection
If you have Windows 10, even with Controlled Folder Access enabled, you're protected, right? Well, you would've thought so. However, there are a number of documented exploits that can circumvent Windows Controlled Folder Access, not to mention that it can be disabled or modified by any application that obtains elevated rights. Now, given the number of zero-days, phishing attacks and other threats, gaining elevated rights is not as difficult as you would have thought.

Having precise control over what applications can access a folder is the only way you can be sure your files are truly protected.

Watch for, and alert when unauthorised processes try to modify, rename or delete protected files.

Place "canary files" on your system that, when opened or copied, will send a silent alert to the specified email addresses.

Create a “vault style” folder that contains files that, once written, can no longer be altered, thus providing a safe place for archived files.

Digitally signed applications are no longer safe, as malware is increasingly being found to have been digitally signed by valid and credible certificates.

Keep contents of a file safe with encryption that only you can access. All files encrypted are done so using a TNO (trust no one) encryption model.*

Simply, clean and state of the art web-based interface, ensures easy configuration on your local, networked and enterprise machines.**

We are currently offering two subscriptions, one for new users, and one for existing Drive Bender and Cloud Xtender users. Both include a free upgrade to a premium license.

Division-M Pty Ltd is a software engineering company based in Sydney, Australia, and was established in the early '90s. When it comes to security, it's essential to know with whom you are trusting your data. Division-M has a long history working with file and network systems, Windows device drivers and other low-level system components. We've tackled many robust technology challenges, and continue to do so.

Division-M Pty Ltd, formally Microsmith Technology Pty Ltd, was merged as a division of Jacal Consulting Pty Ltd in 2003 (hence the name), and become a stand-alone entity in 2010. Division-M has been responsible for many successful products over the years, including Game Jackal (acquired by SlySoft Inc. in 2007), Drive Bender, Cloud Xtender, and our latest addition to the product family, ANVIL File Security. Proudly, our products have been used by many hundreds of thousands of customers, from all corners of the globe.

ANVIL File Security came to life as a product while we were working on Drive Bender 3.0, as it contains similar technology. Moreover, we were looking to create a file system platform that would allow us to bolt on all sorts of incredible technology, from file-based events that can trigger custom actions, through to real-time file duplication and cloud file syncing. If you have any great ideas, feel free to drop us a line!